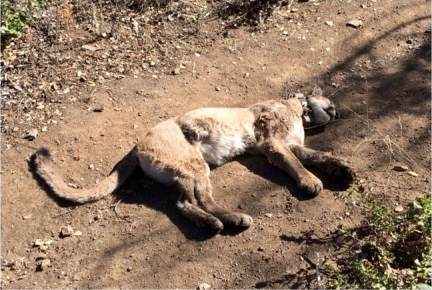 The City of Thousand Oaks has taken steps to protect people, pets, and animal predators by halting all City use of rodenticides. The City Council voted unanimously on April 14, 2015* to discontinue the use of anticoagulant rodenticides in operations and maintenance of municipal facilities and landscape except under circumstances of extreme risk of danger to the health of our citizens or damage to infrastructure. This vote is one more step towards the City goals of implementing a comprehensive Integrated Pest Management (IPM) program and reducing potentially toxic pollutants.

When residents have unwanted rodents on their property, poison is often their go-to solution. But most people don't realize the danger this choice poses not only to children and pets, but also to wildlife. Anticoagulant rodenticides  - i.e., rodent poisons that stop blood clotting to create lethal internal bleeding - used in these substances don't just kill rats, gophers and ground squirrels. Non-target predators such as hawks, owls, coyotes, bobcats and mountain lions feed on the poisoned rodents and become severely ill or die themselves. It may take several days for a rodent to die, making it slower and easier prey for a larger mammal or raptor in the meantime. Unfortunately, once the dying rodent is eaten, the poison passes into the predator's body.

Animals aren’t the only species at risk to the dangerous effects of rat poison. According to the Center for Biological Diversity, 10,000 kids are poisoned by rat poison each year in their own homes. To combat this home (and environmental) health risk, the Environmental Protection Agency (EPA) took legal action and banned the residential use and sale of some SGARs. The California Department of Pesticide Regulation followed suit; and in October Governor Jerry Brown signed AB 2657, which bans the use of second-generation anticoagulant rodenticides in California state parks, state wildlife refuges, and state conservancies.

The rodenticide problem was the subject of a seminar on alternatives to rodenticides hosted by Ventura County Supervisor Linda Parks and State Senator - and environmental champion-  Fran Pavley. Senator Pavley kicked off the symposium by presenting her monthly Environmental Sustainability Award to the Oak Park Unified School District, which banned the use of rodent poison on its campuses.

Almost all our predators are poisoned

Research presented at the seminar was undertaken by the University of California, Cal Poly San Luis Obispo and the National Park Service (NPS) over more than a decade in and around the Santa Monica Mountains National Recreation Area (SMMNRA). It documents widespread poison exposure in coyotes, bobcats and mountain lions. Rodenticide exposure was the second leading cause of death during a 9-year coyote study, second only to collisions with automobiles. Over 83 percent of coyotes tested positive for poisoning. Researchers also found anticoagulant rodenticides present in 90 percent of mountain lions and 92 percent of bobcats, which indicates compromised predator health in the entire region. If not killed outright by the poison, it weakens the predators' immune systems, making them susceptible to secondary diseases such as mange and infection.

Integrated Pest Management is the Solution
Some experts assert that poison does not kill off the pest population, but rather only makes it cycle up and down. Integrated pest management, or IPM, is an alternative, ecosystem-based strategy. It focuses on long-term prevention of pests and their damage through a combination of techniques such as biological control and habitat manipulation. IPM is a win for facilities management, since it cuts costs compared to poison-based rodent control programs and is completely safe to use. (See also our web page on Integrated Pest Management.)

At the symposium, Pepperdine University, Topa Mountain Ranch, Oak Park USD and the Ventura County Watershed Protection District all presented IPM techniques they have successfully used on their sizable properties to reduce rodent populations. Some of the methods they have employed include:

What you can do at home
If you discover you have rodents on your property, first try to identify the species. Then figure out where the species gets its food, shelter and water, which will help with finding the best methods for removal. For instance, if the rodent spends a lot of time underground, placing traps above ground isn’t the best option.

There are many other IPM approaches that can be effectively used in a residential setting, including the following techniques:

By employing these poison-free techniques to root out rodents on your property, you will not only be protecting pets and kids, you will also be doing local wildlife a huge favor.

To properly dispose of any old or unwanted rodenticides, pesticides, or other toxic or hazardous waste, please make an appointment to take the material to the City’s Household Hazardous Waste Facility.

[1]  California Department of Fish and Game, California Code of Regulations Title 14, §465.5. Use of Traps. Immediate Dispatch or Release. All fur bearing and non-game mammals that are legal to trap must be immediately killed or released. Unless released, trapped animals shall be killed by shooting where local ordinances, landowners, and safety permit.

Free viewers are required for some of the attached documents.
They can be downloaded by clicking on the icons below.