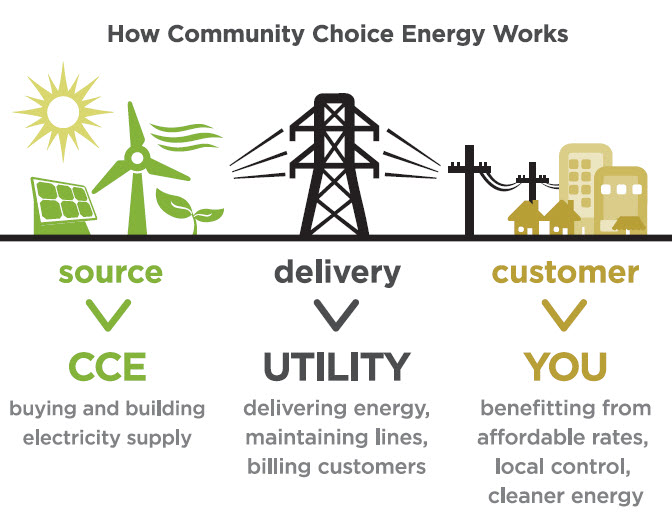 Community Choice Energy (CCE) enables local governments to purchase or develop power on behalf of their residents and businesses, putting energy purchasing and pricing options into the hands of local decision-makers. CCE’s goal is to provide cleaner energy options, reduce greenhouse gas emissions, and reinvest in local energy. Existing CCEs in California have managed to do this while also lowering rates. There are already five operational CCEs in place in northern California within PG&E territory, the oldest of which, Marin Clean Energy, began its operations in 2010. Three newer ones are now serving former SCE customers in southern California.

Clean Power Alliance/CPA (formerly Los Angeles Community Choice Energy)
On December 12, 2017, Thousand Oaks City Council voted to join Los Angeles Community Choice Energy (since renamed to CPA), a newly formed CCE established by the County of Los Angeles. The Thousand Oaks vote followed closely on the heels of the Ventura County Board of Supervisors decision to enroll in the program the same day. Ojai was the other city within the County to join the program in 2017, with the cities of Camarillo, Moorpark, Simi Valley, Ventura and Oxnard joining in 2018.

CPA will offer customers the choice of three electricity options – one consistent with the current electricity mix offered by Southern California Edison (SCE), one that has a higher (50%) renewable energy content, and one at 100% renewable content. Each customer may choose the plan that’s right for them. Alternatively, customers can choose to continue to receive their electricity from SCE. CPA will begin serving electricity to Thousand Oaks in the first part of 2019.

Tri-County Study
In 2016-17, the City of Thousand Oaks, along with ten other municipal governments, participated in a Tri-County study to explore the feasibility of establishing a new CCE to serve the region. The feasibility study is available at Central Coast Power, the group formed to oversee this project. Although the study and subsequent peer review suggested that a newly created regional CCE program spanning Santa Barbara, San Luis Obispo, and Ventura Counties would likely not be a viable venture in terms of the program’s ability to provide competitive rates and remain a solvent organization, many of the participating entities have since explored options to join existing CCEs.