The City will be installing new sidewalks along the east side of Westlake Boulevard, between Triunfo Canyon Road and Agoura/Hampshire Road and on the west side of Westlake Boulevard, between Agoura Road, Hampshire Road and the 101 Freeway. In addition, Caltrans will be installing crosswalk striping and modifying existing bike lanes as part of an overlay project in early 2019.

The design has been completed and the City received final approval in December 2017  from Caltrans to proceed with the construction of the project. Construction is expected to start  by Spring 2018 and be completed by Fall 2018. 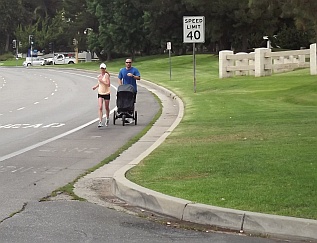 y list that ranks missing sidewalk locations based on several factors. Westlake Blvd is one of our busiest streets and frequented by pedestrians and bicyclists. Over several years, this area has experienced a number of  reported vehicle-bike collisions. These improvements will provide for the increased safety of all users.

Temporary lane closures during non-rush hour periods are expected. We will be notifying residents  of these impacts via changeable message signs, project identification boards, and through social media.

Additionally,  some mature trees along Westlake Boulevard are being impacted by construction. The City hired an arborist and a landscape consultant to evaluate and minimize impacts on trees and recommend locations where replacement trees may be planted. After obtaining easements from adjoining properties, a meandering sidewalk design was decided upon to  further minimize the removal of mature trees. A Sidewalk Concept Plan was also been prepared that describes why and which trees in the Cal-Trans right of way need to be removed.

After receiving input from area residents on the design concept alternatives and approved by the City Council, a bid process to hire a contractor will be conducted. Community meetings were held on October 7, 2015 at Westlake Elementary School, October 21, 2015 at the Traffic and Transportation Advisory Commission and on November 18, 2015 with the Bicycle Advisory Commission. Concept plans (provided below) that include input from area residents were provided at the February 23, 2016 and February 14, 2017 City Council Meetings.

The City will also be holding another community meeting on April 12th, at 6 PM, at the Northshore HOA Clubhouse, 2636 Northshore Lane, Westlake Village to discuss the design and construction impacts.

This page will be updated as the project progresses. Questions may be directed to Mike Tohidian, Project Manager at Mtohidian@toaks.org or 449-2516