The review of the Advice Letters (1 & 2) filed in March 2019 has now been competed by staff. The end results are rate increases as follows: 2.2% for 2018 and 1% for 2019 (rates for 2020 are expected to be set similarly for this year). Overall, staff felt this was good news as these water rate increases are significantly lower than the original request and only slightly higher than the recent increases by the City and California Water Service Company.

The CPUC unanimously approved the  Proposed Decision.  This great news means that Cal-Am's Southern Division will not be consolidated and that its current rate design for Ventura County will remain in effect.

The Proposed Decision (PD) by the CPUC Administrative Law Judge on California American Water Company’s 2016 General Rate Case was issued on November 13th.  Cal Am's proposed consolidation of its Southern Division, the draft settlement agreement with the City of Coronado, and the proposed full implementation of Automated Meter Infrastructure (AMI) were all denied.  This is good news for Cal Am customers in Thousand Oaks as it means much lower rate increases than what were originally proposed in 2016.  Unfortunately, the PD does not provided enough information to determine exactly what the final rate increases will be.  Accordingly, rate model hearings with the Division of Ratepayer Advocates at CPUC's San Francisco office are scheduled to obtain more information on the final rate increases; City staff will be attending these hearings.  Additionally, City staff and our attorneys will be discussing the PD directly with Commissioner staff in the coming weeks.  A final ruling on the case is expected at the CPUC meeting on December 13th.  Cal Am customers may still submit comments on the PD to the CPUC.

Cal Am Opening Comments on PD

Cal Am Reply Comments on PD

You may have recently received 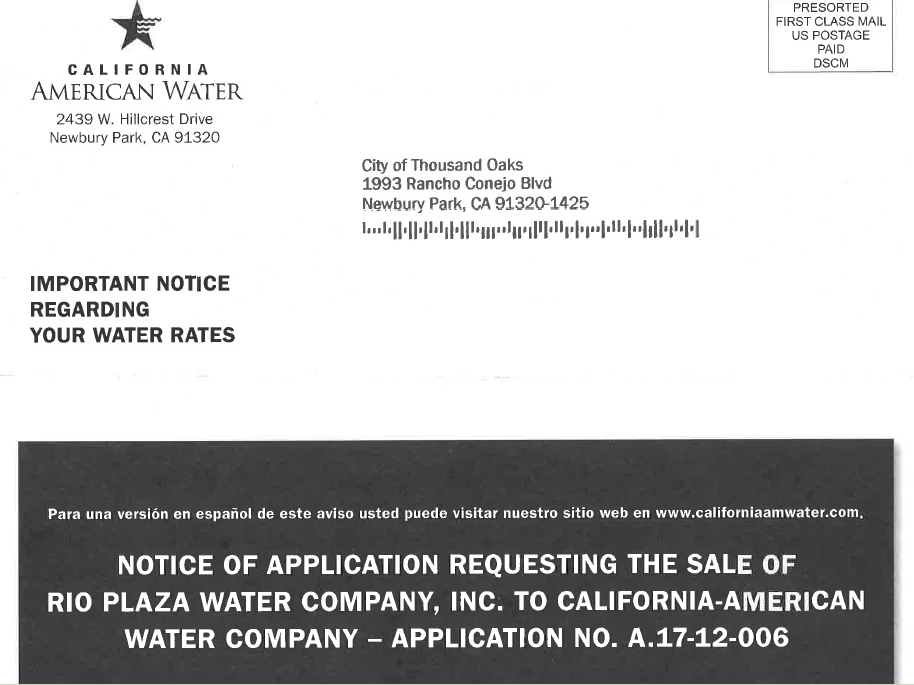 this notice from Cal Am. View the full notice, and the City’s response here.

Additionally, The City received this memo from the CPUC regarding the rate case.  Note that the proposed and final decisions will come 4th quarter 2018, per the CPUC. The City will continue to monitor & provide updates on the decision.

California American Water is proposing rate hikes varying from 5% to 25% (depending on how much water is used) next year to cover increasing operating, maintenance, and capital costs, including costs in other water systems throughout Southern California. To see how rates differ in the proposed consolidated areas see here. The rate increases will affect 47% of the City's residents. To find out if you are affected by the proposed rates increases view the service area map.

The City feels the residents are being unfairly burdened by these higher rate increases and therefore, have been involved in opposing the rate hikes over the past year. The California Public Utilities Commission (CPUC) is the public entity who oversees the process of rate increases.  You may view the testimony provided by the City to the CPUC.