This community has evolved from a rural Ventura County settlement into an attractive and desirable Southern California City. Thousand Oaks offers the ideal mixture of commercial, industrial, residential and recreational space in an exceptional location.

The City's history dates to the Chumash Native Americans who dwelled in the Conejo Valley hundreds of years ago. In 1542, the area was discovered by Spanish explorer Juan Rodriguez Cabrillo, who claimed the land for his Spanish king. The area remained virtually unsettled until the early 1800s when the Spanish governor granted 48,671 acres of land grants to loyal soldiers - land which included the Conejo Valley. (Conejo is the Spanish word for rabbit which are abundant in the area.)

Throughout the 19th Century, early pioneers migrated to the area. The first post office was built in 1875, and the small settlement became a stop on the stagecoach route between Los Angeles and San Francisco. With the invention of the motor car and the construction of a highway between those two major cities, the Conejo Valley began to evolve.

In the early 1900s the Janss Family purchased 10,000 acres of farm land and began planning a "total community." The family would leave a positive local imprint, and the Janss name remains highly visible in the Conejo Valley. 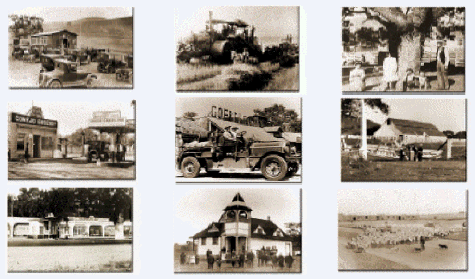 Chicken ranches, dairy farms and apricot orchards dotted the valley when Louis Goebel opened his Lion Farm in 1927. Crowds flocked to see Goebel's performing jungle animals. In later years, his tourist attraction was called Jungleland. Soon the motion picture industry discovered the Conejo Valley's beauty. Scenes from "Birth of a Nation," "Tarzan," and "The Adventures of Robin Hood" were filmed here. Today, that trend continues with movies, television shows and commercials being filmed or videotaped within the City and adjoining areas.

By 1961 there were two shopping centers, an industrial park, schools, churches and a four-year liberal arts college in the growing town. On Sept. 29, 1964, the community voted to incorporate and selected the name, City of Thousand Oaks, honoring the abundant, majestic oak trees in the area. In the first years of Cityhood, nearly 20,000 persons lived within the 14.28 square miles of the newly drawn boundaries.

Since incorporation, the City has developed into a quality community, integrating effective planning and citizen involvement. Having grown to 56 square miles with more than 127,000 residents, City officials remain dedicated to offering an envious family lifestyle.

In an effort to maintain its natural environment, more than 15,000 square acres have been designated as "Open Space" containing more than 75 miles of trails. This preserved space allows residents to enjoy the same natural beauty that the Chumash Native Americans first enjoyed hundreds of years ago.

City#1: Stagecoach Inn - State Landmark #659, County #30 (designated May 1976). The Inn was placed on National Register of Historic Places and designated a State Historical Landmark in December of 1975 and is owned by the Conejo Recreation and Park District. The original structure was built 1876 but was destroyed by fire in the early 1970s. The Inn is a Monterey style structure of northern California redwood with a wrap-around porch and balcony. The original structure served as a school, post office, steak house, church, gift shop and movie set. Location: 51 South Ventu Park Road. The present location is not the original site of the structure. Its original location was nearer the Route 101 Freeway where a historical marker is placed.

City#2: Sycamore Tree - County #44 (designated June 1978). This unusually large and old specimen of California Sycamore was over 150 year old when designated as a landmark. The Chumash Indians are said to have bent the lower branches to mark the location of underground water. Location: Stagecoach Inn, 51 South Ventu Park Road.

City#4: Hunt Olive Tree - County #64 (designated January 1982). This is the only surviving tree an orchard planted by R. O. Hunt on the Salto Ranch, which he established in 1876. The tree was moved to its present site in 1993 and is in excellent condition. Location: Southwest corner of Hillcrest Drive and Lynn Road on property owned by Circuit City Stores.

City#5: Oakbrook Regional Park Archaeological Area - County #90 (designated February 1983). The 428-acre park contains 11 archaeological sites within a few yards of each other along the streambed of a narrow oak-wooded canyon, with bedrock mortars and shelters containing Chumash pictographs. At the park is a small interpretive museum, a Chumash village reproduction, and hiking trails, all of which are open to the public. Location: 3290 Lang Ranch Parkway, off of Westlake Boulevard.

City#6: Dos Vientos Ranch Buildings - County #99 (designated May 1986): These buildings are owned by the Santa Monica Mountains Recreation & Conservation Authority and the Conejo Open Space Conservation Agency. These two large barns, built in 1930, were on the Dos Vientos Ranch, a portion of the 30,593-acres Rancho Guadalasca Mexican land grant made to Isabel Yorba in 1836. Joseph Lewis, a business partner of Adolfo Camarillo, farmed approximately 8,000 acres of Dos Vientos Ranch. He established the lima bean industry in Ventura County. Note: These historic barns were dismantled during the construction of the Dos Vientos residential development. The lumber was catalogued and is now in storage with the Conejo Recreation & Park District. Location: West Potrero Road.

City#7: Crowley House - County #109 (designated December 1986): This house is currently owned by the Conejo Recreation and Park District and is used as their District Sports Office. It was built in 1910 for newlyweds Frank and Mae Casey Crowley on the Newbury Ranch, the house earned the nickname “Mother of Thousand Oaks” because in the early 1920’s it served as a real estate office for the first housing development in the Conejo Valley. Carloads of prospective buyers were brought from downtown Los Angeles, shown lots among huge oak trees and given dinner in the Crowley House dining room before making the return trip. Later, Louis and Kathleen Goebel owned the house. The two-story white frame, five-bedroom house still has its hardwood floors, mahogany beams and volcanic rock fireplace. Location: 2522 Pleasant Way (next to Parque de la Paz). Shown by appointment only.

City #8: Janss House – County #112 (designated July 1987): This house is owned by the City of Thousand Oaks and houses the Arts Council. It was built for Peter Janss as a weekend retreat in 1931. In 1943 it became the principal home of Janss’ younger son, Edwin Janss. The Janss family in the US began with Peter Janss’ immigration in 1870 from Denmark. He became a physician, then moved from Chicago to Los Angeles in 1893. In Los Angeles, he became a land developer and was joined in his business by his sons Harold and Edwin. The Janss Corporation planned and developed in Monterey Park, the San Fernando Valley, the Conejo Valley and Westwood Village, donating the land on which UCLA is built. Location: 482 Greenmeadow Drive

City#9: Banning Dam also known as Lake Eleanor Dam – County #120 (designated May 1988): Currently owned by the Conejo Open Space Conservation Agency and built 1889 the dam is in a gorge with sheer cliffs and drops of 40 to 50 feet. It is considered either the first or second concete arched dam built n the State of California. Its 8-acre lake and 529 acres of surrounding open space create a habitat for wildlife. Location: Eleanor Creek, South Westlake Boulevard.

City#10: Hillcrest Center - Designated an historic landmark on April 8, 1997, by the Thousand Oaks Cultural Heritage Board (CHB Resolution No. 1) as the site of the first city hall built by the City of Thousand Oaks. The historical designation applies to the exterior wall (facades and architectural style) of the Civic Center buildings. Built in 1973, the building housed the administrative offices of the City and Conejo Recreation and Park District until 1988. Location: 401 West Hillcrest Drive

City#11: Joel McCrea Ranch (Placed on the National Register of Historic Places and on the California Register of Historical Resources on April 18, 1997) - Currently owned by the Conejo Recreation and Park District, this former cattle ranch is comprised of approximately 220 acres of gently sloping chaparral covered hillsides forming a long, narrow valley at the eastern end of the Santa Rosa Valley. The working portion of the ranch is located near Moorpark Road with a cluster of buildings including the barns, shop, milk house, corrals and bunkhouse. Adjacent to the ranch buildings, a private road runs east through the fields to the end of a small valley where the main residence and maids’ residence are located Location: On the east side of north Moorpark Road near its intersection with Santa Rosa Road in the northern most portion of the City of Thousand Oaks.

Historic Building Preservation and Protection Measures in Effect for Timber Schoolhouse and Auditorium
July 2018 Update: Demolition of buildings and equipment at 1872 Newbury Road, site of the Timber Schoolhouse historic and auditorium buildings, involves removal of only non-historic structures. The Municipal Code sets standards for preservation and alteration to these cultural resources. Monitoring of work is in place to ensure there are no impacts to protected buildings on the property. For questions or concerns regarding work activities, please contact Senior Planner Stephen Kearns.

View a map of the Timber School Site Work

City #13: Goebel’s Lion Farm Site (aka Jungleland) - County #6: Currently owned by City of Thousand Oaks. The original buildings and animal compound were built in the 1920s and later demolished in the mid 1970s. (The Thousand Oaks Civic Arts Plaza currently occupies a portion of this site.) Louis Goebel established his farm in 1927 as a site where he could import, breed, and maintain exotic animals for rental to movie studios. His animals included the famous MGM lion. The popular tourist attraction Jungleland developed from the animal farm. Roy C. Wilson, architect, designed some of the building structures at Jungleland. Location: Southwest corner of Thousand Oaks Boulevard and Conejo School Road.