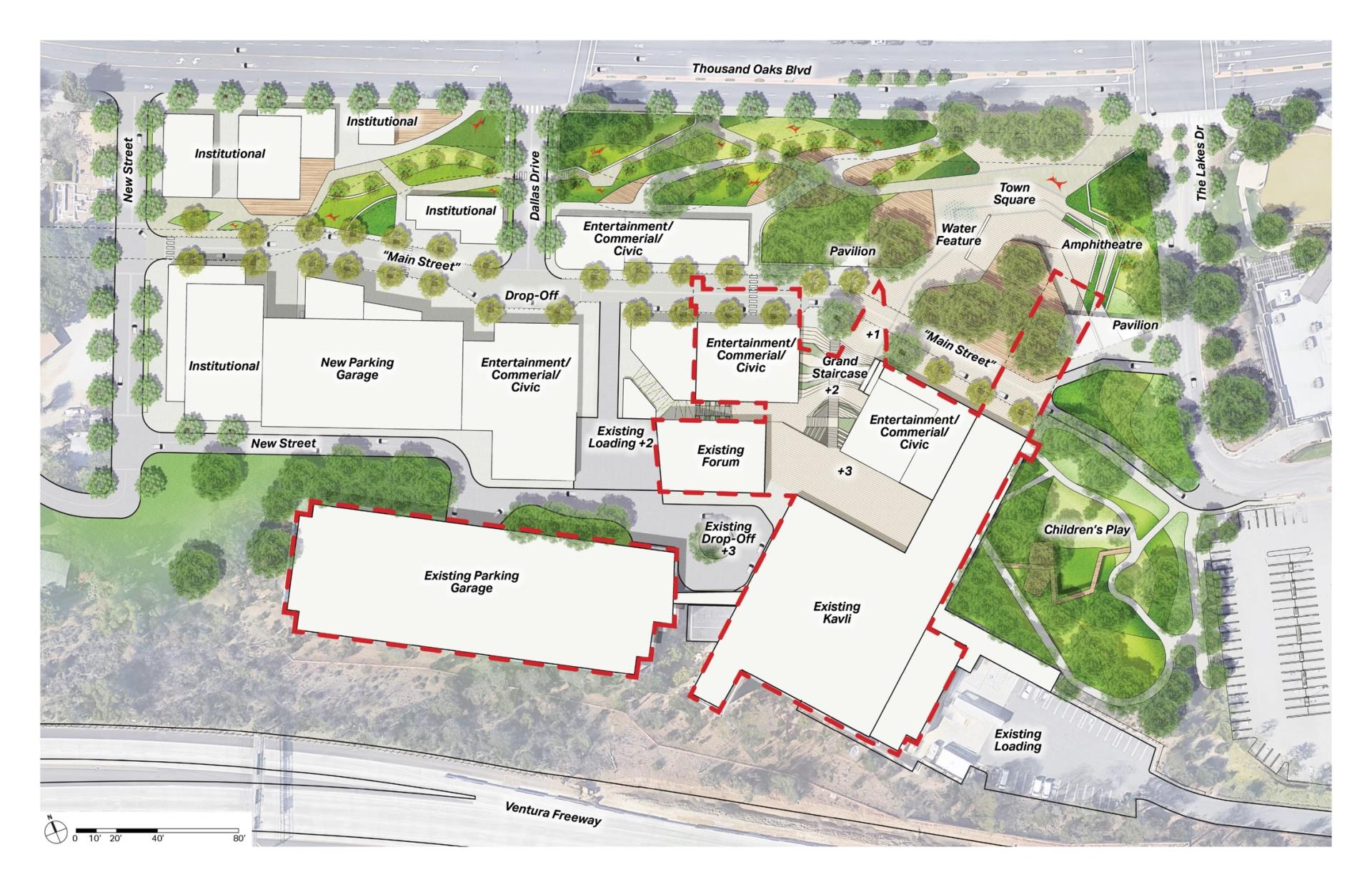 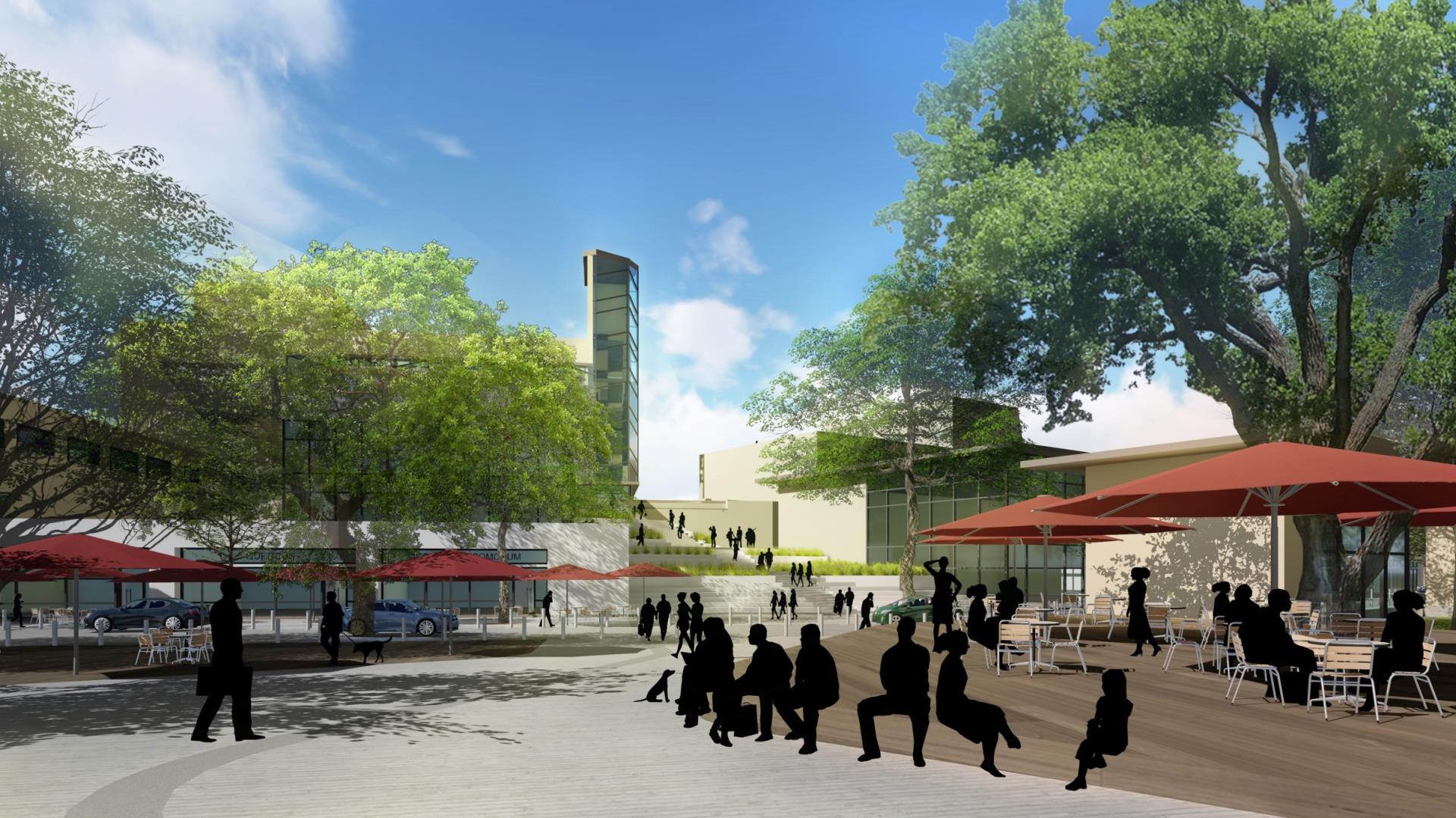 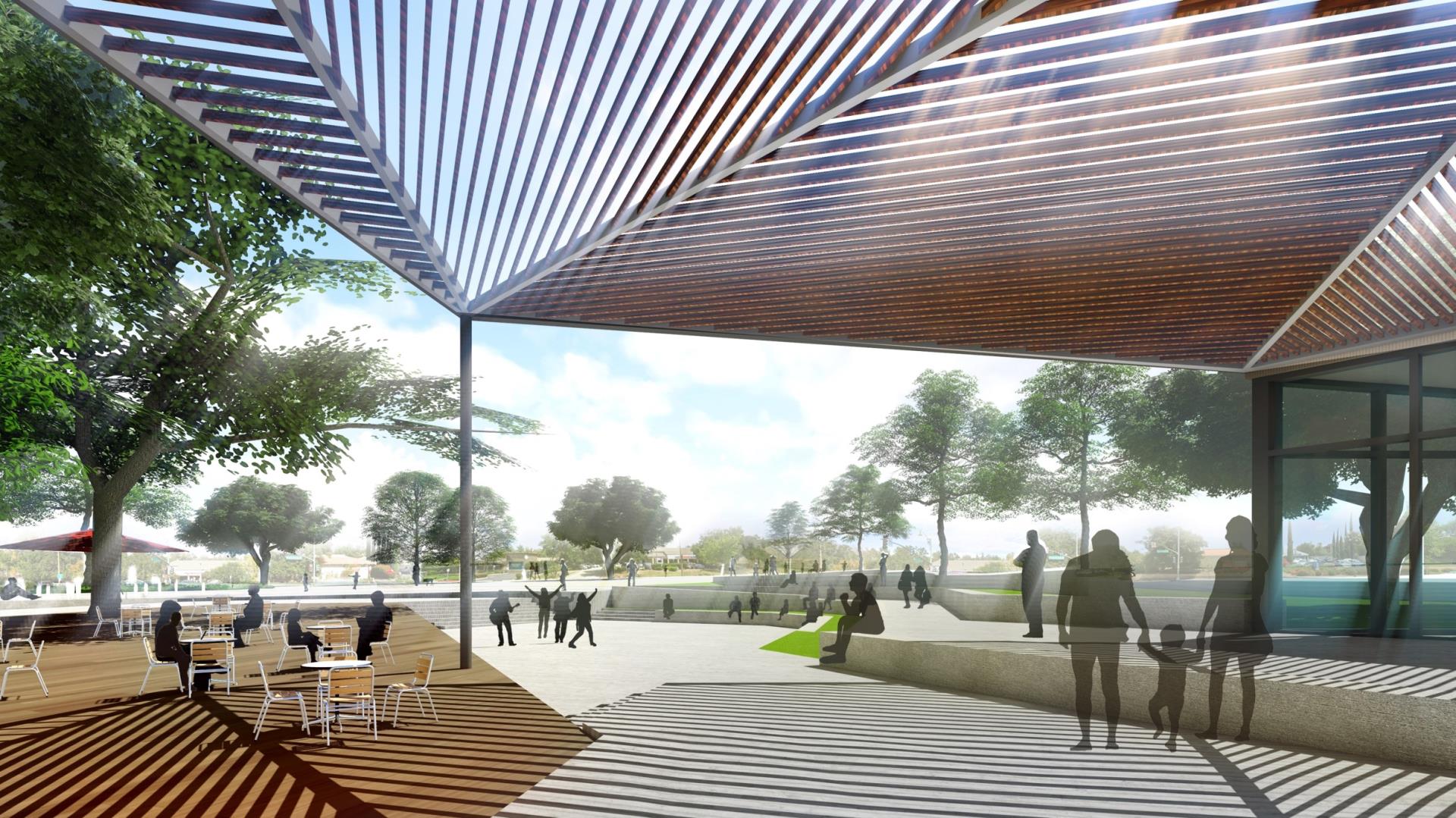 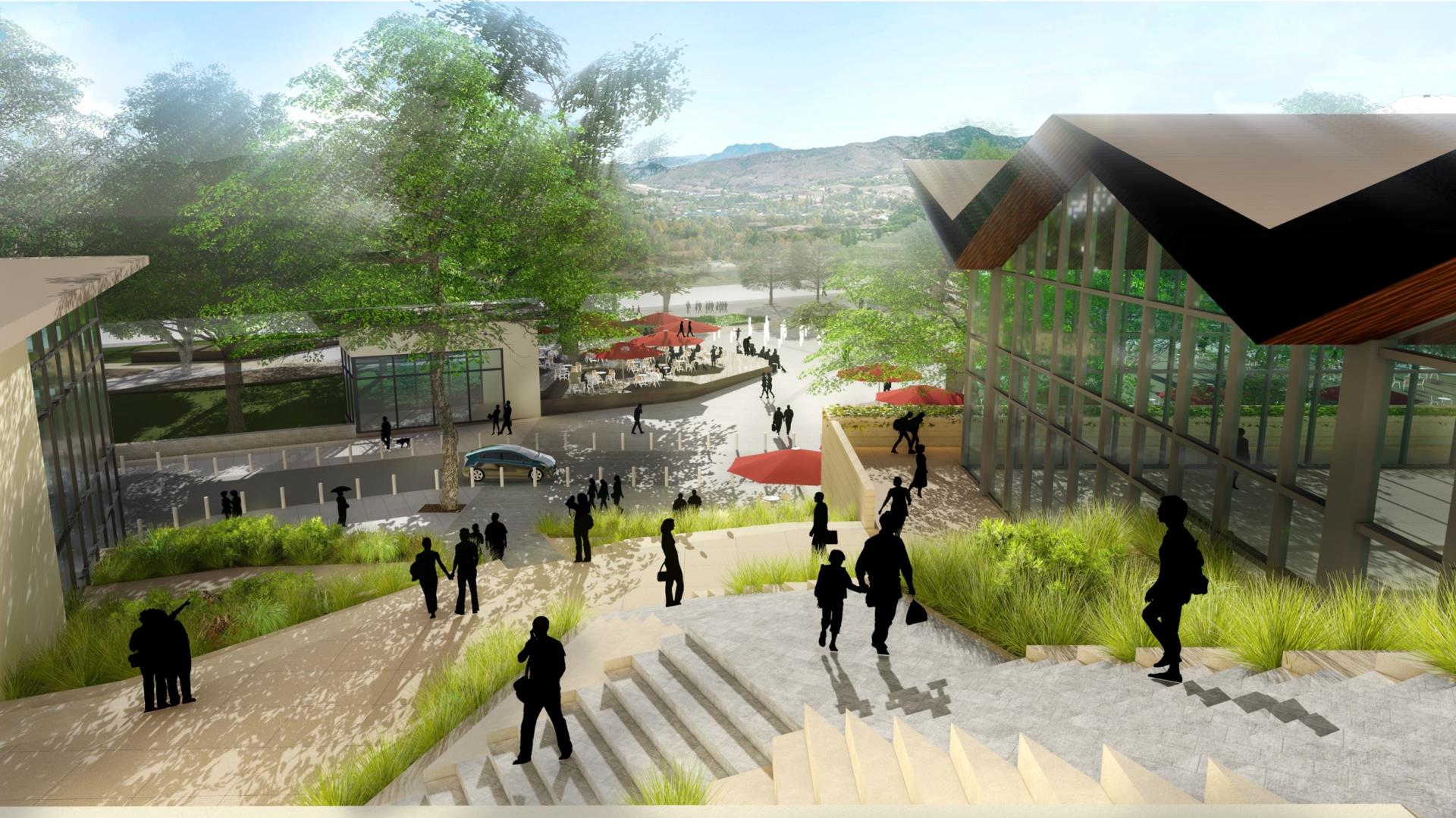 The Civic Arts Plaza (CAP) was completed in October 1994 to be a regional performing arts and civic center. The campus includes the 1,800-seat Kavli theatre, and the 394-seat Scherr Forum theatre, which also doubles as the Andrew P. Fox City Council Chambers and Planning Commission venue. The campus includes a 750-space 5-level parking structure, and 87,000 s.f. of office area dedicated to City Hall functions and 10,000 s.f. for tenants. Total building area on the CAP campus is 209,000 s.f. The theatres collectively host about 200,000 visitors each year for a variety of live performances/events from musical theatre and bands, to speakers and local school and dance performances. The CAP is within the Civic Arts Plaza Specific Plan, which was adopted in 1989, and has been amended several times over the years.

The Specific Plan covers 27 acres. The CAP campus totals approximately 14 acres. The 10-acre "The Lakes" shopping center is located east of CAP, and the 3-acre Westside property is located west of the Dallas Drive entrance to the CAP. Any proposed improvements to the CAP campus would complement and build upon prior analyses, including periodic maintenance evaluations coordinated by City staff, and a Needs Assessment Report for the Thousand Oaks Civic Arts Plaza that was completed in July 2005 by a team of architects and a landscape architect (Kaplan, Denton, Spitz). A variety of small projects were completed from that effort, but due to the downturn in the economy in 2008, major design changes were not completed.

In addition to being the first implementation step of the Downtown Core Master Plan, the Campus Master Plan provides an opportunity to comprehensively re-envision the CAP campus for the future as it approaches its 25th anniversary.

Click Here for the complete report to City Council November 5, 2019.

The CAP will be Thousand Oaks true civic center whose City Hall and other civic supporting uses are functional, inviting, accessible, and interconnected.

The CAP will be a regional hub and a local asset for cultural, entertainment, and art events and amenities to draw Thousand Oaks residents and visitors from afar.

The CAP will be viable, uniquely Thousand Oaks, and a recognizable “place” with a variety of active uses that support the cultural and civic centers, activate the public realm, and frame a central Town Square for Thousand Oaks

An Improved Civic Arts Plaza is a DCMP Priority

The Downtown Core Master Plan (DCMP) states a vision for a new Downtown for the City, with the Civic Arts Plaza (CAP) at its core. During the DCMP process, the City engaged hundreds of community members in a variety of venues and formats:

The improvement of the CAP is identified as one of four Critical Actions in the DCMP:

•Redesign the Civic Arts Plaza to be more active and connected
•Expand arts, cultural, and entertainment programming
•Create an entertainment and commercial destination
•Improve walkability and the pedestrian environment 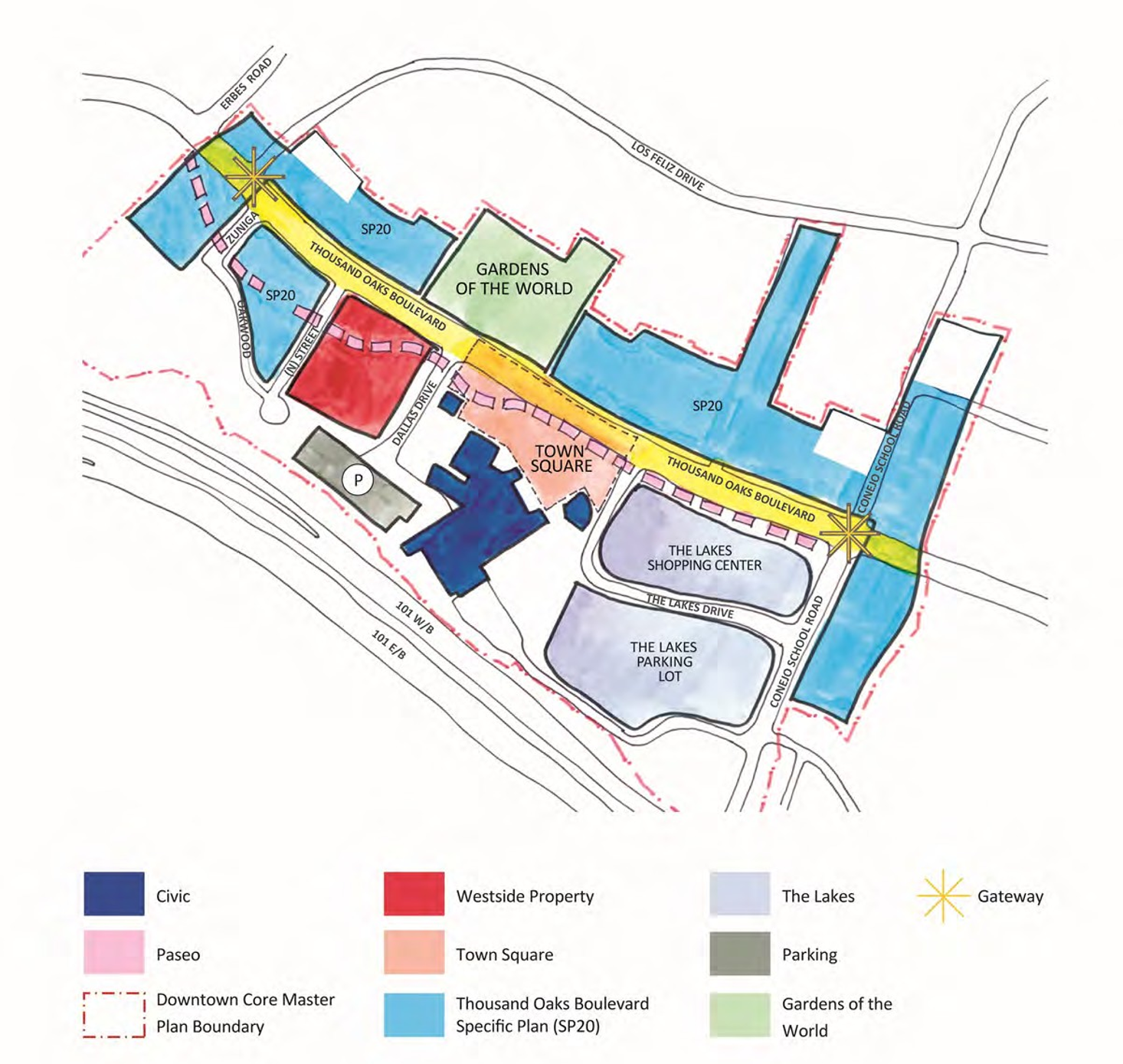