The climate crisis will bring a number of environmental changes to the City of Thousand Oaks; the key ones being related to heat, precipitation, wildfire, and drought. These will impact some people’s lives more than others.

Data from Cal-Adapt, the State’s hub for accurate and up-to-date data related to climate change throughout California, shows that Thousand Oaks and the county can expect to see at least three times as many extreme heat days annually and a three-degree increase in daily temperatures. These differences in temperature will not affect all neighborhoods equally – those with lower levels of tree canopy cover are more likely to experience worsened urban heat island effect, which will generate a higher demand for air conditioning in those areas and put residents there at higher risk of heat illness. The California Office of Environmental Health Hazard Assessment's CalEnviroScreen tool assesses which areas and residents are especially vulnerable to pollution’s effects due to a variety of socioeconomic, health, and environmental factors such as the incidence of poverty and housing burden, occurrence of asthma, and exposure to ozone and traffic pollution. Census tracts that score higher on the CalEnviroScreen tool could be at higher risk of detrimental health effects associated with climate change-related heat.

The anticipated effects of climate change on precipitation patterns in Thousand Oaks are more uncertain than those on temperature. Data from Cal-Adapt shows that the city could receive an additional inch of precipitation annually, and a recent study by the Desert Research Institute and Watersheds Coalition of Ventura County indicated that the amount of rainfall that the county receives could increasingly fall in extreme events. This could cause flooding in certain areas of the city where stormwater collects or cause “induced flooding” where stormwater pipes are not equipped to handle high volumes of water within short periods of time, resulting in water ponding near the deficient pipe. Key areas in Thousand Oaks are those designated by the Federal Emergency Management Agency (FEMA) as flood zones. Extreme rainfall events could also cause mudslides in susceptible areas, which are being identified by the City. 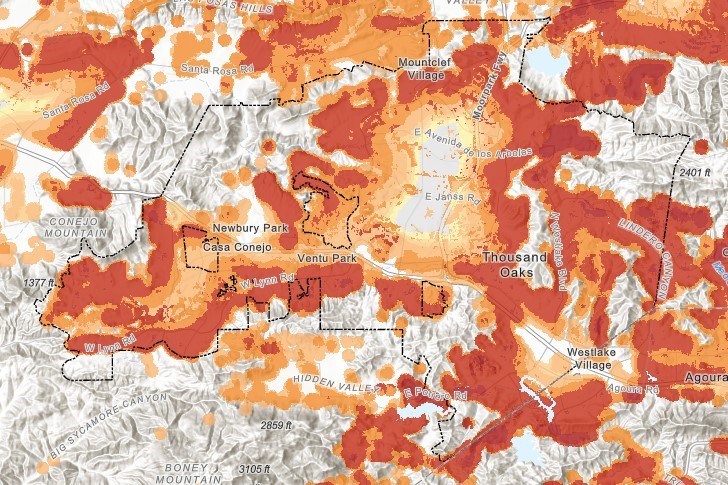 The climate crisis is anticipated to increase the probability and areas of wildfire in Thousand Oaks, according to data from Cal-Adapt. Wildfire will more directly affect residents and business located on the periphery of the city in closer proximity to wildland areas; however, areas closer to the city’s core could be indirectly affected by ignition from other structures, particularly in high winds, and all areas in the city will be exposed to smoke. Residents in areas with high CalEnviroScreen scores and with high risk to housing from wildfire are especially vulnerable.

Drought conditions are expected to increase as a result of climate change. While localized drought conditions will not affect city water supply, which is imported from Northern California, local conditions could affect countywide agriculture because most water used for irrigating Ventura County’s agricultural fields is pumped from groundwater. Drought conditions could diminish groundwater recharge, making it costlier and more challenging to irrigate crops. This could result in price changes at the grocery store or shifts in agricultural practices and employment opportunities that would more strongly impact agricultural workers and low-income and food-insecure households.

Residents and stakeholders interested in learning more about the city’s approach to resilience against climate change are invited to share their ideas at toaks.org/climateaction.